SCHAUFENSTER #2 - by Domi Chansorn
Installation & live performances in interaction with the environment.
On the Kirchplatz in Dietikon, from 29 September - 2 October 2022

SCHAUFENSTER #2 will stop at Dietikon's Kirchplatz, a centrally located and very lively pedestrian zone close to the railway station, nearby shopping centre, weekly market, cafeterias, etc. SCHAUFENSTER #2 will become a meeting place here for a long weekend. The performances will take place at rush hour, early in the morning, and in the evening, and sometimes ad-hoc in-between, determined by the encounters and the audience's wishes. Chansorn will primarily play solo, in dialogue with the surroundings, but also spontaneous or concert-type sets with invited or chance guests.

The performances in Dietikon are a co-realisation with the Dietikon Projektraum. 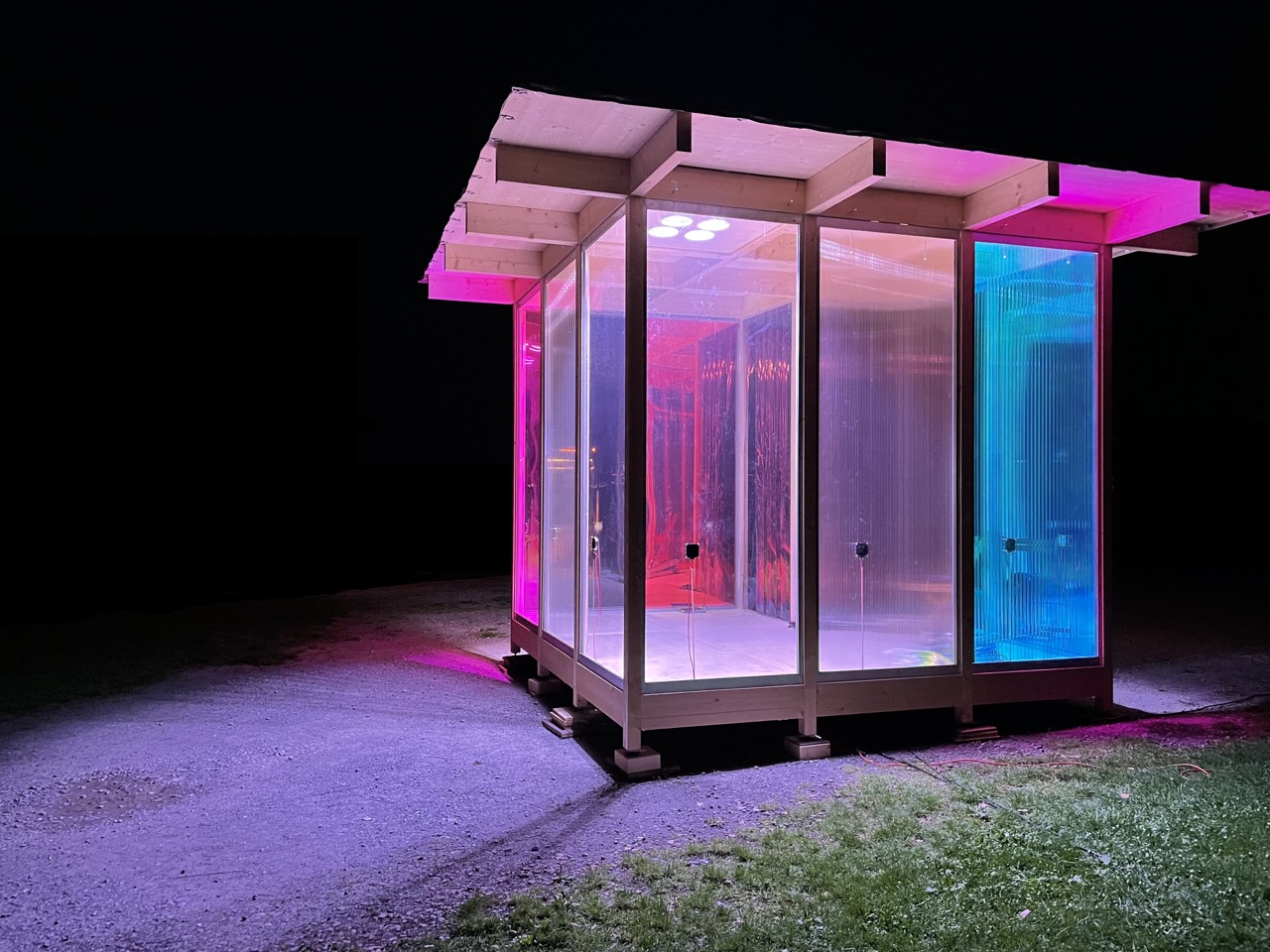 Saturday, 01.10.22
11:00-13:00:
Playing for the last hour of the weekly market - until the end of the market activity on the church square this Saturday.
16:00-19:00:
Apéro concert, the audience is invited to actively participate. Anyone who wants to can bring their instrument and immerse themselves in the musical cosmos of Domi Chansorn.


SCHAUFENSTER #2
Live performance in interaction with the surroundings

Domi Chansorn plays with commonly heard sounds and their dimensions in the urban environment. This enigmatic young Zurich musician focuses on spatial musical live performances in direct interaction with the real environment, the audience, and the momentum of randomness on the spot.

SCHAUFENSTER #2 thus becomes a personalised "counterpart" and improvises with everything that comes and goes. It is an interplay with the dynamic elements and sources of the environment: passers-by, street noise, wind and weather - as well as the strong visual presence of the SCHAUFENSTER and its adaptive transparencies, colours and reflections. The audience sits in the "tiny space" or in front of it. They mingle directly and physically with the musical soundscape being played - and so the place is constantly being reformed.

Domi Chansorn's sound sources are an orchestra of various instruments that he has accumulated and musically appropriated over time. He utilises the entire frequency range of the human ear and creates vibrations that are omnipresent in our everyday lives, but often only reach us subconsciously. Playing with frequencies is how Chansorn reacts to the environment in and around SCHAUFENSTER #2.

DOMI CHANSORN
Domi Chansorn is what is called a "musician's musician". His reputation within the Swiss music scene is gigantic. And anyone who has seen the multi-award-winning thoroughbred musician play live knows what everyone is raving about. And if you've ever heard him sing like an angel, you're in for a real treat. After his first solo album "Bright Times Can Be Dark As Well" in 2011, his EP "Change the Changes" was released on Two Gentlemen. Since then, Chansorn has worked with a wide variety of bands, artists and formations such as Fai Baba, Evelinn Trouble, Bonaparte or Sophie Hunger and many more, each as a musician and/or producer. In spring 2022, his highly acclaimed second solo album "Hoppalulu Bum" was released on Second Thoughts Records.

PROJECT SERIES
SCHAUFENSTER is an initiative of Studio DdP and is intended as a series of projects for the greater Zurich area. The object itself and the first version SCHAUFENSTER #1 were conceived in 2021 by Dimitri de Perrot and Li Tavor. SCHAUFENSTER is a walk-in "instrument" that interprets its surroundings sonically and visually and makes it possible to experience it in an inviting, playful and low-threshold way. The project aims to initiate and open up different or new perspectives in one's own immediate living environment, and steps out of the theatre into the public space of the city and canton of Zurich towards the living environment of people in the neighbourhoods, settlements, villages and other forms of "residential". It is placed and played in public places over a certain period of time and thus places itself in the middle of daily routine.

SCHAUFENSTER as an “instrument” is used and curated by various actors from different artistic disciplines and cultural backgrounds. After its initiation as SCHAUFENSTER #1 by Li Tavor and Dimitri de Perrot, the musician and multi-instrumentalist Domi Chansorn takes over the baton for SCHAUFENSTER #2. 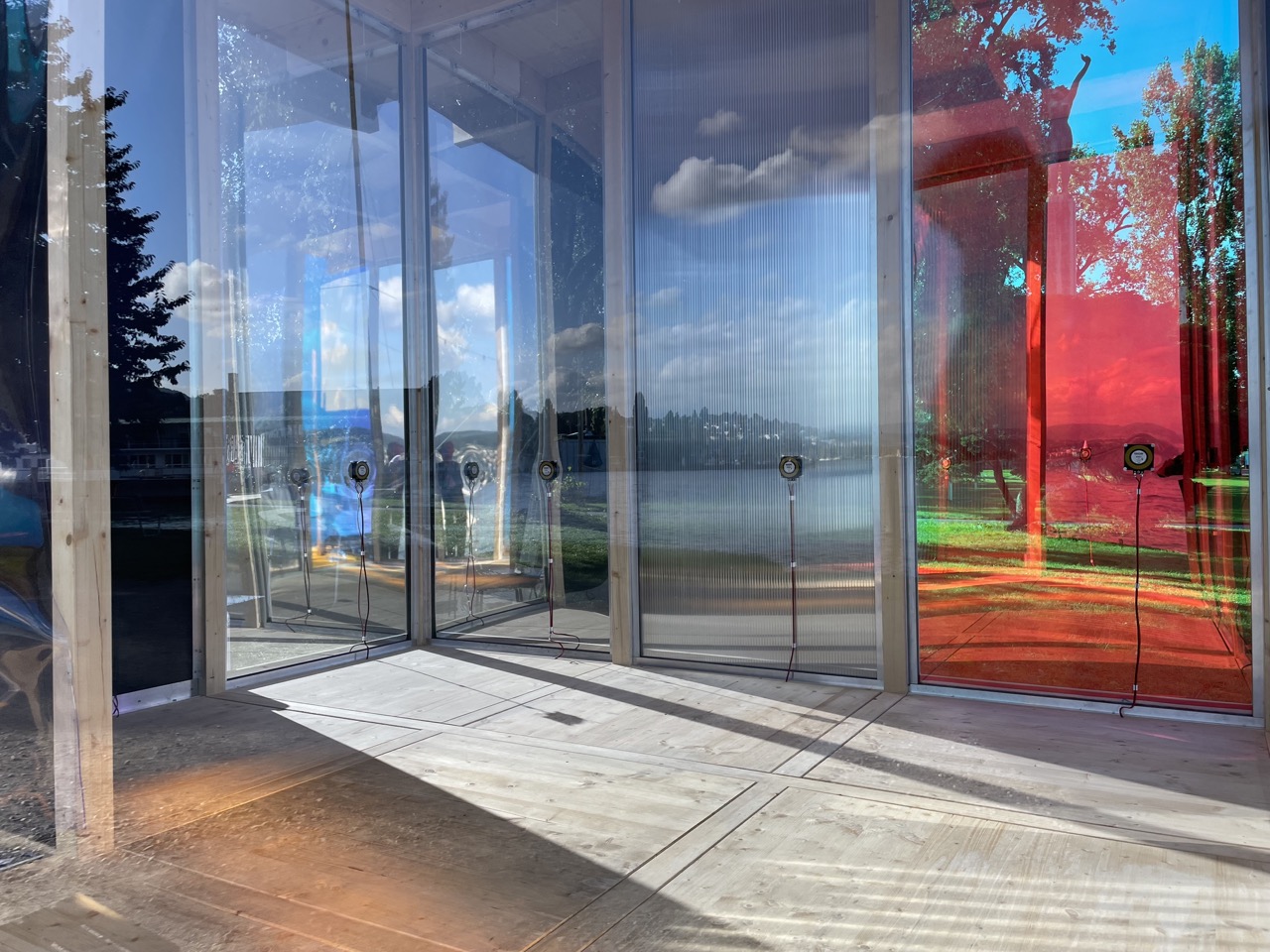