MYOUSIC - Where does the sound go when I no longer hear it?
Dimitri de Perrot
with Julian Sartorius

MYOUSIC is a scenic sculpture for theatre spaces without actors on stage. It gives the leading role to sound in its interplay with space, light and stage design. The sound material consists of everything that can be found during a performance in a theatre hall: moments of contemplation, memories of past performances, the inhalation of a performer in front of a monologue, a late-arriving spectator or the silence of the audience. An important theme in this work is the human desire to withdraw into a protected space though there is always an intrusive outer world - such is the manifestation of live.

MYOUSIC plays with conventions, expectations and the mundane ways of life. In abandoning a visual narrative tradition, it opens a space for imagination and allows for a critical dialogue about experiencing the known and established ways of thinking and reacting. 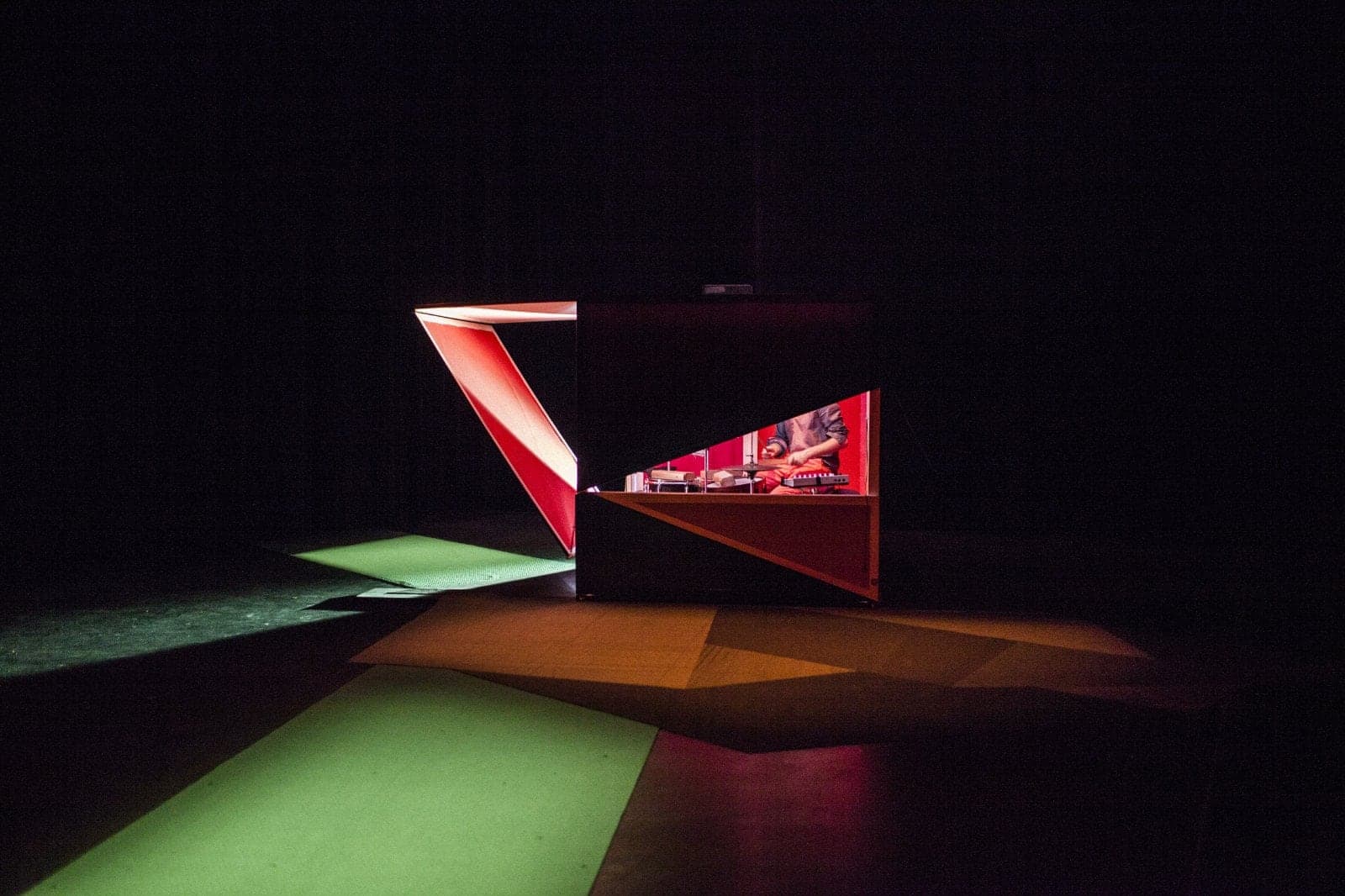 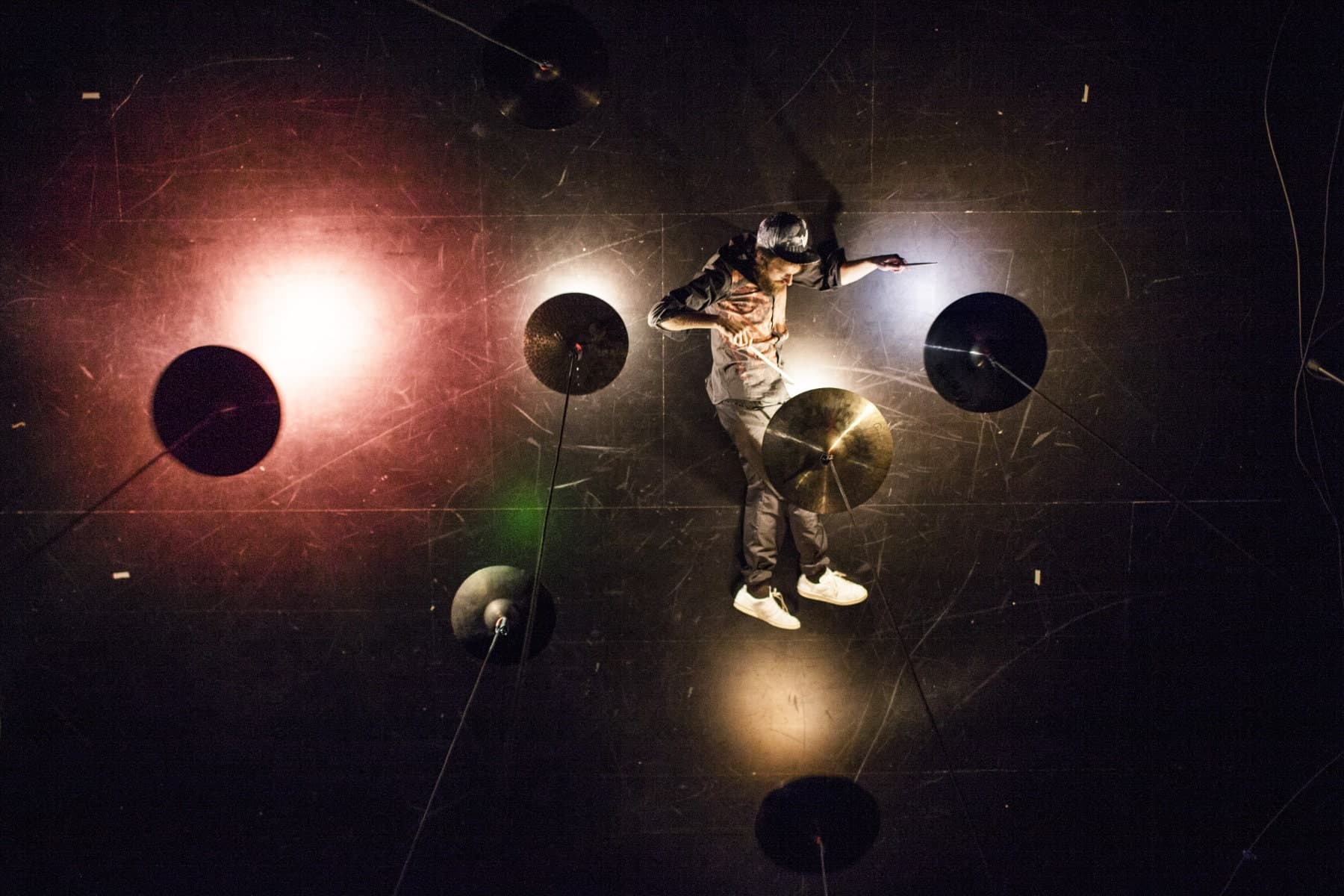 VOICES OF THE PRESS
«MYOUSIC - A magical theater experience.» Mathias Balzer – BzBasel
«Myousic - A sensual, touching, collective experience.» – ParisArt
«MYOUSIC is a rich, colorful and electric spectacle that is not just directed towards fans of bizarre noises. The universe that is created is unbelievably appealing – because it speaks of us, the audience.»RTS – Vertigo
«MYOUSIC evokes the pulse of the moment, the living present.» Maya Künzeler – Kultur Kompakt
«De Perrot’s sound installation opens the pores of our perception.» Pirmin Bossart – Luzerner Zeitung
«Suddenly you see music. As though it were a physical being that occupies the stage instead of the performers.» Christian Hubschmid – SonntagsZeitung
«Rich, colorful and indescribable – that’s MYOUSIC.» Veneranda Paladino – DNA Alsace
«When sounds let your imagination run free.» Eric Facon – Neue Zürcher Zeitung NZZ
«Surrealism for your ears.» Martin Erdmann – Das Kulturmagazin 041
«Myousifique!» Nina Scheu – Tages-Anzeiger
«The scuffle of your neighbor’s feet, the whispers behind your back and the roaming thoughts of concert visitors create their own notes in MYOUSIC.» Julia Bendlin – Luzerner Zeitung
«Recommendation of the week! MYOUSIC in Paris: » Philippe Noisette – Les Inrocuptibles
«In de Perrot work sound is material, something you can hold. » Carlos Garsán – CulturPlaza
«Dimitri de Perrot lets us consider theater as a purely acoustic experience, without bodies and without images, by extracting material that can be shaped from sounds and then creating a stage figure in and of itself.» Fabrice Gottraux – Tribune de Genève
«Everything that happens in MYOUSIC is something you have neither heard nor seen before» Thierry Voisin – Telerama Paris

Final rehearsal at Südpol Luzern with premiere on the 8th of June 2016.

What does MYOUSIC tell us?
Dimitri de Perrot: MYOUSIC tells a story of habits and conventions and refers to how we perceive living moments – the fine line between the past and the future in which our life plays out and which, I believe, we frequently lose sight of. MYOUSIC is a piece without actors or visible staging. The story is told solely via sounds and the ostensible absence of images, which viewers themselves begin to make.

What prompted you to create MYOUSIC?
What would it mean if my curiosity were to lead me to viewpoints or perspectives that questioned everything I’ve known up to now? I often ask myself whether I would like to be surprised, whether I am actually prepared to discover something new, or whether I am just searching for the known in the unknown. Perhaps the most crucial question that arose for me while creating this piece is: How close do I let things get and how much I am willing to give of myself to really discover something new?

The audience is surrounded by a sound installation that fills the space. What was your inspiration for this?
There were various sources of inspiration. But probably the main source was my memories of countless evenings onstage, with the audience as my counterpart, with its impulses, reactions and secret thoughts. I have always seen the audience as a kind of contemporary ensemble that plays its role exactly the same as the actors on the stage.

This piece breaks with customary forms of theatre and opens new possibilities for how we perceive. Is this typical for your work?
I have always attempted to develop and foster a different way of viewing everyday things. For instance, when I developed my own instrument from a turntable, or with the multi-disciplinary work of Zimmermann & de Perrot. MYOUSIC, however, creates a change in perspective when sound momentarily replaces the prominent position normally occupied by the image. We live in a confusingly complex time full of changes and uncertainties, and I think it requires a certain degree of flexibility when it comes to thinking to be able to perceive changes as a chance and find constructive approaches for the future. Perhaps with my work I hope to raise a certain degree of awareness and acceptance for the unknown, the uncertainty, in order to facilitate an opportunity for something new.

What’s your relationship to sound?
Sounds are my material. They are the raw material from which I construct images, compositions, entire worlds. I like the fact that the ephemeral nature of sound enables me to create something new. Sounds are fleeting and they often resonate internally; memories and emotions are awakened with every passing sound, reminiscences that can transport us back to a thousand and one real-life moments.

Tell us about your encounter Julian Sartorius?
Julian is for me one of today’s most fascinating contemporary musicians. He is not only a phenomenally versatile percussionist, but also an incredibly inquisitive, sincere and munificent working partner. A few years ago, when he was still on tour with Sophie Hunger, we made some studio recordings together. That encounter left a lasting impression on me, and when I wanted to work with rhythm in MYOUSIC, I immediately thought of Julian.

Why rhythm?
Rhythm is for me pulse, impulse, and time. Rhythm forms a basis on which everything can flourish.